'Learning together for a better tomorrow'

Welcome to our class page.  We have only been back to school for a couple of weeks but already we have packed so much into each day! Take a look through our photos to see what we have been up so far!
Here we all are trying to smile in a rare moment of afternoon sunshine! 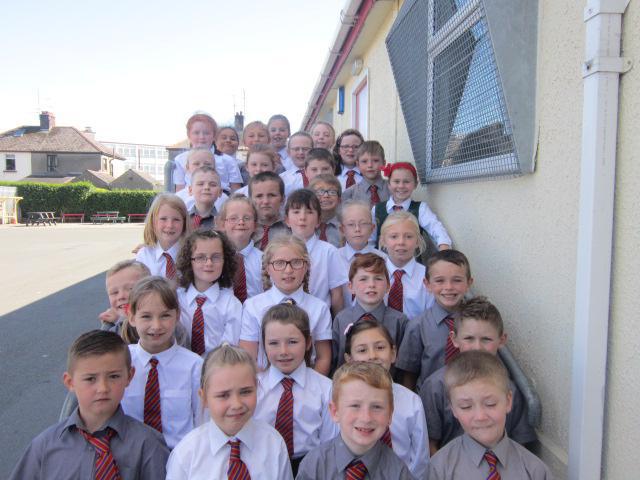 What a fantastic day for Year 4B!

We had so such success in our sports day!

As part of our World Around Us topic on the rainforest we have been learning about how plants grow in these regions.

Today we made a terrarium which will let us observe how condensation forms droplets on water at the top of the bottle then rains down on the plants below.

We are learning about the rainforest this term.  We have found out a lot of information from books and videos and we also had a visit from the Zoo Lab!  We even have a Kapok tree growing in our classroom!
We learned a lot about the different animals that live in each layer of the rainforest from Sarah.

This Year we will be doing our Year group assembly on the rainforest.  Please take time to learn the words of the songs at home the following links will give you the lyrics.

This term we are learning about World War 2.  We have already been on an educational visit to Palace Stables in Armagh, where we learned about what it was like for children who were evacuated from Belfast.  We found out how people bought food during the war using ration cards.  We also got to meet and American G.I. who told us what it was like to be in the army during World War 2. We were told about air raids and how important it was to carry a gas mask everywhere! We learned a great deal from this trip and now we are looking forward to our evacuee day later in the term.

For the next six weeks Mary and Ian will be coming into school to teach us some traditional dances and songs. Today we learned the Clap Dance.  We were in partners and part of a larger group of 8 or 10 children.  We all had great fun and Ian played his banjo as we did our dance.

Year 4 Trip to the Planetarium

Our class really enjoyed viewing the books at the Scholastics Book Fair.  Thank you to all our parents who supported this event.

The Peoples Park in Portadown is being renovated. The council has offered local schools the opportunity to work with artists to create banners to decorated the park for the grand opening.

Our class spent the day with a local artist called Debbie who helped us to create individual pictures which will then be used to form the banner.

We learned a lot about the different mediums artist work with.  Debbie taught us how to create a marble effect on paper.  She explained to us how artists come up with their ideas. We learned how using contrasting colours in pictures can have a brilliant effect on the final image.

Debbie used the colourful pictures by Chegall as inspiration for the pieces we created in class.

We used the idea of colourful Carp as our starting point.

We looked at pictures for ideas
We learned about an artist called Chagall
We used templates to make our fish
Debbie showed us how to marbel paper.
The oil sticks to the paper.
And the page is now marbelled
We dipped the paper in the water.
We added glitter to our fish to make them sparkle!
We used recyled paper to decorate our fish.
Debbie helped us to add glitter!

We viewed everyone's work at the end.
The Gallery
Debbie has taken all our finished pieces away and she is going to put them all together to make the banner.  This will then be printed so that all the images are protected from weather damage when they are displayed outside.

Roald Dahl was a fantastic author who wrote many amazing children's books.

We celebrated Roald Dahl Day by coming to school dressed up as a character from one of his books.

We spent time finding out about his life out how he came up with the ideas for his stories.

In class we reading George's Marvellous Medicine. In this story a boy called George has to deal with a particularly mean and selfish grandmother.  We have spent time thinking about how different our grandmothers are compared to George's grandmother.

We have been working hard on numeracy in class

Data handling using cubes we made giving information about ourselves

We are learning how to recognise how numbers are made up of Tens and Units.